After I had finished reading The Assasin’s Blade I immediately picked up Empire Of Storms by Sarah J. Maas because everything was still fresh in my mind and I thought it would be better to read it back to back to get the full story. (This Review contains spoilers!)

The first thing that comes to my mind when I think about what I love about this book is that it shows how Aelin went through despair, a loss so deep it was tearing her apart slowly and painfully. She did everything for her kingdom – to give them a better world someday. She’d even sacrifice herself for it in the process. This book made me love her as a character even more so than the other books in the series.

I loved how Sarah made sure we got to read through different points of views. We got to read from almost every character’s perspective. (A few exceptions) It gives you more insight into each of their minds, how they think about things, what motivates them to do what they do – why they make the choices they make. That really gives the book a lot of depth which I think is important in a series like this.

One of the highlights was Manon Blackbeak’s character growth getting even better than it was in Queen Of Shadows. Manon is one of my favorite characters in this series. She’s so interesting because she has lived so long as a witch – with her grandmother and her coven of witches – living by their rules and traditions. But in EOS (and even in Queen of Shadows) you see her starting to doubt if what she’s always believed in is even the right thing? She starts to stand up for herself, making her own decisions regardless of what her grandmother would do to make her regret it. I also love the unity and family she has formed with the Thirteen and Asterin.

Dorian went down a very interesting path in this book. Trying to learn how to control and use his magic with Rowan’s help. Which was a really cool element because these two men helping each other was so nice to see and read about. I’m excited for what’s to come for Dorian as we move into the last book of the series which is to be released in May 2018.

Seeing Lorcan and Elide band together to get what they want even if that might not necessarily mean they like each other. But seeing how their relationship slowly started to drift from indifference and impassiveness to trust and understanding was really beautiful. Although I don’t know how I feel about these two yet in that department. Considering what happened at the end with Maeve, it’s going to drive a huge conflict between them going forward. It’s going to be interesting to see where Sarah takes them next. 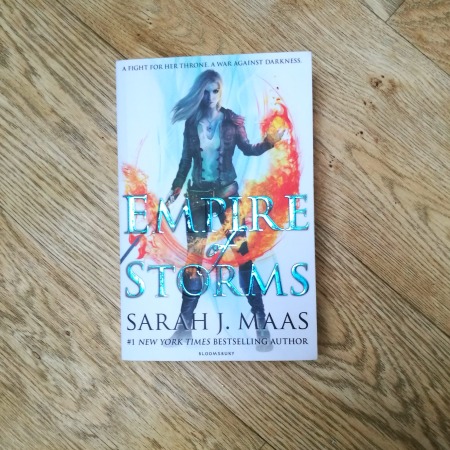 Having Aedion and Gavriel finally meet after so long was so heartbreaking because Aedion had already given up on seeing his family again and then there is his father. He didn’t know how to react, how to repair the damage that’s been done in the past. Gavriel really wanted to make things right but for Aedion it takes a lot more than that, I think. I would love to see them have that conversation of forgiving each other and making amends.

Something I didn’t like about this book was that there was such a lack of Chaol who has played such an important part in the story beforehand. To cut him out of an entire book was not something I had expected going into it. I would have loved to know more about what was going on with him. But I think Sarah made that decision because she plans on releasing a novel based on Chaol later this year in June. So I’m excited for that.

All in all, I really enjoyed it. Sarah created this wonderfully woven together with story that just takes you on this big journey full of obstacles, character development, flashbacks and shocking twists. Aelin has been through so much and I can’t wait to see what’s in store for her in the next book. I gave this book 5 stars on Goodreads.

Let me know in the comments what book you recently read and if you wrote a review for it feel free to link us! I love finding new books to add to my never ending TBR pile.

View all posts by Sandra