I have mentioned that I didn’t really start out this month reading much because I was watching a lot of TV Shows which was fun but I did find some time to read a few more books after all! So let’s get into it!

First I read Alice’s Adventures in Wonderland by Lewis Carrol which I did like overall but I’m trying to get more into the language of classics since I was struggling with it quite a bit when I tried to read Pride and Prejudice. What stood out to me the most is how different it was from the movies. My rating on goodreads was 3 stars.

After that, I was really in the mood for a fun, fluffy contemporary so I picked up The Unexpected Everything by Morgan Matson which is about Andie who has a father who works for congress and he gets caught up in a Scandal which takes a turn on more than just Andie’s plan’s

for summer. I really enjoyed all of the friendship dynamics between Andie, Bri, Toby and Palmer even though they went through hard times together towards the end it was a great element and made the story even more enjoyable. My rating was 4 stars.

In my April Favorites post, I mentioned A Series of Unfortunate Events (Netflix Show) and how fun it was for me to watch even though it really isn’t intended that way but Violet, Klaus, and 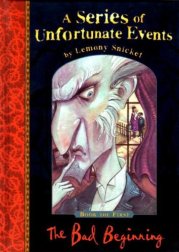 Sunny really grew on me so fast, it made me want to know more so I picked up The Bad Beginning and The Reptile Room right after. They were almost back to back like the episodes but a quick read for me during train rides. My rating for both books was 4 stars.

For this last one, I was actually not planning on reading it in April but I saw the hardcover edition of The Hate U Give by Angie Thomas for 9,99€ on Amazon and I just had to get it! (That makes it the cheapest Hardcover I own which is really

cool considering it was only released in February. Usually, Hardcovers stay expensive) and as soon as it arrived on my doorstep I knew I had to read it ASAP. And Boy, did I love this book! It’s one of those books I can honestly recommend for everyone to read, because this story, the symbolism behind it, is so important! The way Angie (a black woman) told this story was honest, real but impactful nonetheless! Of course, I gave it 5 Stars!

As mentioned above, I got The Hate U Give by Angie Thomas because the price was reduced and I had wanted to buy it at some point anyway!

I had wanted to read The Foxhole Court since I first heard of it a couple of years ago but I never picked it up during that time but as I was ordering books anyway, I thought why not finally get TFC (The Foxhole Court, The Raven King & The King’s Men) so I can read it as I’m waiting for my copy of A Court Of Wings and Ruin to arrive.

Last but not least, I got the first 4 Books in A Series Of Unfortunate Events by Lemony Snicket. (The Bad Beginning, The Reptile Room, The Wide Window & The Miserable Mill) I read my way through the first 2 and will be picking up #3 and #4 soon but there is no rush since I already know what happens up until Book 4.

Swetlana actually suggested this idea to me and I kinda love it? Because it’s a good way to recap the month seeing what we posted and what we’re most proud of because I believe that the content we put out for you guys, should be something that we love and are proud of.

That is all for April! I hope May will be just as fun reading-wise as April was 🙂 I do hope to get some reading done whilst I have my exam next week. (Wish me luck!)

What have you read in April? What post are you most proud of?

View all posts by Sandra