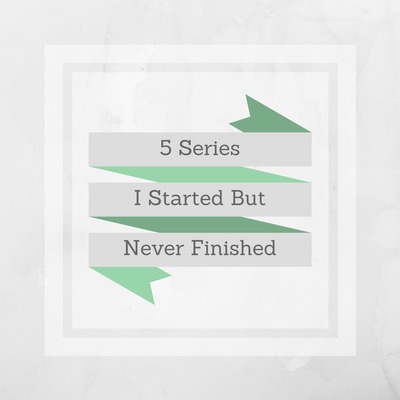 I’m sure a lot of you guys have a ton of series you might want to read and a good deal of them were shared in this week’s Top 10 Tuesday as the topic was all about book series people wanted to read. While my immediate reaction was ‘I want to talk about mine too!’, I also quickly realized that I actually still have some series that I should probably either finish or give up on before I jump into new series.

That’s pretty much where this post is coming from! I am going to take a look at the series I have started in the past but never continued with and talk a little bit about why! Hopefully talking about these series with you guys will give me the motivation to either finish them off or let them go!

Shatter Me Series by Tahereh Mafi

Huh. I honestly always thought I had rated Shatter Me either 2 or maybe 3 stars (at most), but apparently, I enjoyed it more than I thought because I rated it 4 stars! Am I confusing this series with another one I didn’t enjoy? I’m honestly quite confused right now. I also did continue and read the first novella Destroy Me but never continued after – did the novella turn me away from the rest of the series? I know so many people love the Shatter Me series and now I’m almost tempted to go back to it and start this series from the beginning?

Have any of you guys read this series? If so, what did you think? Is it worth it to go back and start reading from the beginning? Please let me know!

Penryn & The End Of Days Trilogy by Susan Ee

Up next on my list is Penryn & The End Of Days Trilogy and I definitely remember really, really enjoying the first book Angelfall (I rated it 4 stars too!) and I have no idea why I stopped reading this trilogy? When I first read this, I had just finished the Unearthly trilogy and really liked the idea of reading about angels and Angelfall put a really interesting spin on it (if I remember correctly)! And then Jackie recently reviewed Angelfall on her blog and had me really excited about continuing this trilogy hopefully soon. And don’t you just love when that happens?

I was actually always really on top of the Snow Like Ashes trilogy and would read the new book as it came out, but for some reason, I never got around to Frost Like Night? I think it might’ve been because I didn’t want to pay the money for the hardcover when it first came out and instead wanted to wait until it got a bit cheaper but then I never picked it up either. But I do really want to finish this trilogy off as I definitely enjoyed it! The first two books both got a 4-star rating from me when I read them!

What originally drew me to the Firebird trilogy was hands down the cover for A Thousand Pieces Of You! It was so pretty and I had to have it on my shelves. Luckily, I did end up enjoying the story too and read the next book. My plan had been to read the final installment in the trilogy right after but that never happened and now I barely remember what happened in the second book and I’m really angry with myself. I definitely plan on finishing this trilogy this year though, along with Snow Like Ashes. I hate having two series unfinished when it’s just one book each to finish them!

Since we’ve already kind of established a trend when it comes to myself and series, let’s just continue down that road for the Red Queen series too. According to my rating on Goodreads, both Red Queen and Glass Sword got 4 stars from me so I really don’t understand why I never picked up King’s Cage when it was released earlier this year. I mean, you’d think I would want to continue with a series I seem to have enjoyed in the past, right? Nope. But unlike the rest of the series on this list, King’s Cage has only been released for four months so I can find some excuses as to why I haven’t read it yet (a reading slump early in the year, new releases I was more excited about and re-reads to prepare for said new releases)! and continue on.

How about you guys? Do you have a long list of series you started but never finished? Or do you like to marathon series before moving on to a new one? Or do you have no unfinished series because you prefer standalones? Let’s discuss in the comments!