For today’s post, I’ve decided to do something a bit different from my usual posts – at least in subject matter. Or, as far as the platform goes? This is still going to be about books and sharing my love for books with people – just on Instagram, or more appropriately: bookstagram.

I’ve really, really been enjoying taking pictures for my bookstagram account for the past few months and since it seems to be working quite well for me, I figured I would share how I do it in case any of you guys want to try your hand at bookstagramming too? I also have a post with a ton of tips and tricks planned for next week that’s going to give you even more information and hopefully take away any concerns you might have about what you need to do or have!

But for now, let’s just get into the picture taking side of things – I’ll take you from setting up my shot all the way through editing and posting.

I learned very quickly that it’s much easier and quicker to take multiple different pictures when you have the props you want to use within arm’s length. So what I do is put down my background (it’s a 1.50€ roll of a fake brick background I got a couple of weeks ago) and collect any and all props right next to it and just out of shot. And you don’t need any props when you’re just starting out – or at all if that’s not something you want. 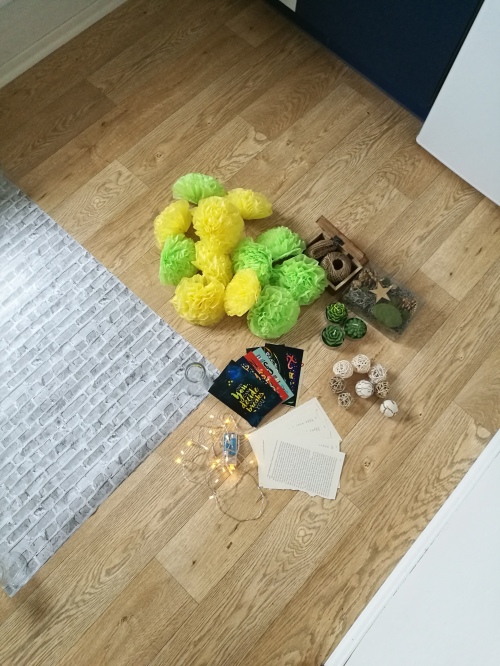 But something I really want to put an emphasis on is the fact that you don’t need to buy any probs or use them for your pictures. If you go back on my bookstagram you’ll see that I started out using just the books I owned (which, yes you either have to buy or borrow from the library or your friends – thanks Sandra, for being aboard this!) and that flower in the white pot in the picture beneath. That orchid has been the sole prop in so many of my bookish pictures and it’s been with me for over two years now.

I am almost embarrassed for you guys to see the next picture but that’s just real life and what my set up looks like (especially the surroundings that you don’t see in the picture – excuse the things on the heater and windowsill) whenever I take pictures. 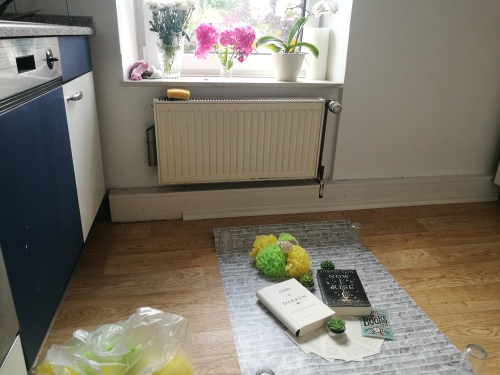 For me, the best place to take pictures is in my kitchen as that’s where I have both the best light and most space to set up everything. Plus, I can take a picture in there at either noon or 9pm and they’ll still turn out really well! Can we please appreciate the fact that some glasses are holding down my background? Because that’s just the reality of things – once again. xD

And as far as setting everything up for the picture – you just have to play around with your book(s) and whatever else you want to use. I’ll often try a few different things, take the picture, edit it to make sure I like the final result and move stuff around if I have to.

Below, is what I ended up with for the particular picture we’ll use as an example for this blog post. 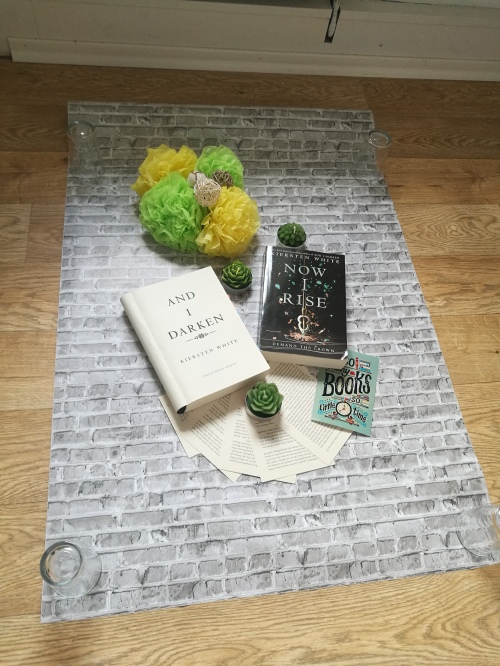 Once everything is set up and I like the way it looks at first glance, I’ll start taking the picture. And I don’t use a fancy camera for this or anything, just my phone (which is a Huawei P9 with a 13MP camera). I always make sure to take multiple pictures of the same set up before I move on to different angles.

Here’s what the picture I ended up taking looked like before I did any editing to it. 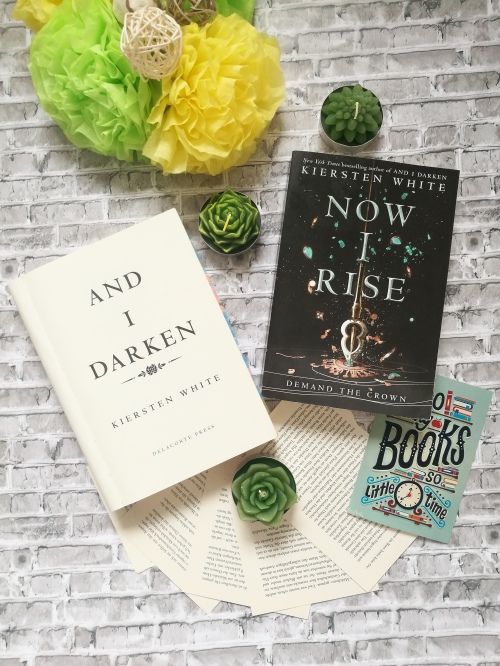 My phone has this setting, where when I click on the part of the picture that I want in focus, it’ll adjust the lightning to make sure everything is clearly visible, that’s all that’s happened above so far. Once I’m happy with the pictures I’ve taken, I take things straight into the Instagram app – that’s all I use for editing my pictures.

At first, I was going to tell you guys how I edit my pictures but I figured it would be much easier to just show it to you so I recorded my screen while editing the picture shown above. I can’t figure out how to make the video player itself smaller, so you might have to zoom out quite a bit to see it all – I apologize for that.

I will usually do everything almost exactly in the way I show above (though it was my second recording as I had my music turned on for the first – I wasn’t aware the app recorded that too) so things might be a bit out of order after I apply the filter.

But with those things, it often comes down to what your picture looks like anyways and you’ll have to mess around with the settings until you’re happy with the results. I can just show you how I do it and what I like for my own pictures. It’s up to you individually to take from that what you want to. 🙂 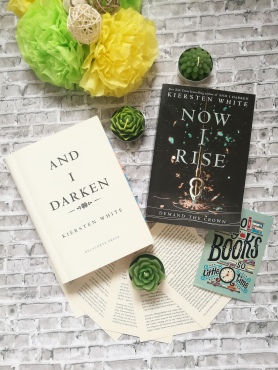 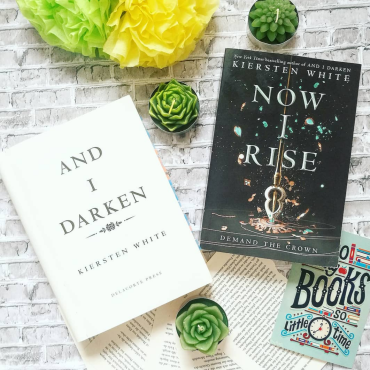 Here are both pictures side by side for you guys to see the difference that editing made – which isn’t really that much but I love it a lot.

Something I’ve learned over the course of the past few months is that it’s okay to play around with your set up, your theme and filter. I find that I’m much more motivated to take new pictures now than I was before when I set on a theme/filter. Don’t limit yourself!

Phew, okay. This actually turned out to be so much more stress than I thought it would be? Especially because the video player just won’t work with me the way I want it too. xD But! We’ll just ignore that for now and just concentrate on what I did get done: tell you guys how I take and edit my pictures! Are you guys on bookstagram too? And if so, what’s your process like? Let me know down in the comments below! I can’t wait to hear all about it. 🙂

29 thoughts on “How To: My Bookstagram Pictures”

I fly off to Norway 🇳🇴 in the morning, so I obviously needed some new holiday nails. And since I haven't done black in ages, that's the color I went for and I love it. 🔥
Today's hair style is brought to us by me putting my wet hair into a clip and not taking it out all day 😂
I truly don't talk about my love for these women enough but they are the band I've been a fan of the longest. I'm so, so proud of everything these three women have achieved and will achieve in the future - whatever it may look like for each of them.
Hands down the group I've kept up with the longest. I've been a fan since the early 2010s and have loved every album they've released. Ever.
HAPPY NEW YEAR 🥳
I finally have gel nails again and I'm loving it! I actually did it all myself too, from start to finish and I have to say, the end result isn't bad at all! Not even on the hand that I had to do with my non dominant hand!
Its our golden maknaes birthday 🥳 I'm a bit late but I wasn't home and didn't have time to take a picture. I also almost accidentally got purple nails for the start of bts birthday marathons. 💜 swipe to see what my nails look like. 😊
My sister is currently really into making her own manicures with gels etc and I've very selflessly offered myself as someone she can practice on as well.
It was recently my two year anniversary as ARMY and what better way to celebrate then to take pics with all of the BTS albums I've collected.
Aaand it's already time to share my July title page! I honestly can't believe how fast time flies by this year. Check out my IG stories for a look at my entire set up for July. 😊
My GO copy of EXO's Don't Fight The Feeling arrived today 🥳 Love how I was able to get this and stay mostly up to date with my Baekhyun album collection! I'm SO close to being all done. 🙌🏼
Last night, I decided to get to my June set up in my bujo and yall. I love it.
Loading Comments...
%d bloggers like this: