A couple of weeks ago, I shared a post on the blog about some things I had been loving around then and as I said, I want to make this a somewhat regular feature because I love sharing things (or people) I love that aren’t just books! And since my list has kind of been growing quite a bit already, I figured it was about time for part 2!

If you guys follow me on social media, you probably already know all about my love for this show, but just in case you don’t. Everyone, I am positively obsessed and in love with La Casa De Papel!

My brother kept telling how awesome the show is and I’ve seen people rave about it online so one weekend in early July, I decided to give the show a shot. And in true Swetlana Loves A Thing fashion, I binged the majority of the show in a 24-hour time span. I was actually both live tweeting and Instagram-storying my experience watching the show – it was something else.

Especially where the characters are concerned. I don’t often find myself head over heels for characters I just met but with this show, my god. Within a couple of minutes, I had my favorites down and that list just kept growing and growing for the most part. Tokyo basically had my heart from the second she appeared on the screen and then Rio joined her and before I knew it, I wanted to keep them all safe. We shouldn’t even get started on Denver. He came out of left field for me and was the character causing me the most stress BECAUSE HE KEPT GETTING HIMSELF DEEPER INTO TROUBLE. Why are characters like that???? WHY.

For anyone who hasn’t heard about this show, we basically follow this group of 8 thieves as they try to pull off the perfect heist. Seven of them are inside the Royal Mint in Spain (the show is set in Spain and in Spanish in the original) while the Professor (the eighth member of the team) is on the outside running the show, pretty much.

I don’t really want to give away too much for you guys – please, just watch the show. It’s fantastic and I am currently desperately waiting for season 3 – whenever we’re getting that one.

The Conqueror’s Saga by Kiersten White

We just got the final book, Bright We Burn, a couple of weeks ago and you guys. You guys.

I’ve shared 5 reasons why all of you should read this series last year when I read the eARC for Now I Rise and I still stand by all of them and I still think all of you need to read this god damn series already.

Getting to the final book in a series is always such a bittersweet experience in my eyes because you’re excited to see where the story goes in the final installment but you also know that that’s it. That’s the last story you’re going to get set in that world (unless the world is created by Cassandra Clare, in which case you’re probably getting about 10 more books) and you have to say your goodbyes to all of these characters you’ve come to love over the course of a few years. That’s never easy.

I don’t think I ever saw myself loving a character the way I loved Lada Dracul.

She is stubborn as hell. She has one goal. From the day she has to leave her home of Wallachia to live as a political hostage in the Ottoman Empire she vows to come back to claim what is her’s: the throne of Wallachia. And Lada goes after that goal. No matter what it takes. She isn’t afraid to ruffle all the feathers out there – matter of fact, she enjoys it.

And on the other hand, as a contrast, we have Lada’s brother Radu who comes to view the Ottoman Empire as his home and finds comfort in Islam. We join Radu on his journey as he realizes that he’s gay and how that relates to Islam for him and the female/female relationship (which is more of a side story, but it’s there) starting with book two, Now I Rise.

Bright We Burn, in as little words as possible, is the gender-bent retelling of Vlad The Impaler and it’s as brutal as you would expect from someone named that – but it’s also so much more. I highly recommend it!

One Day At A Time

If you’ve been following my blog for quite a while, you probably have heard me talk about this show before, but just in case you haven’t: I love, love, love One Day At A Time. So much. And it’s a show that never gets old? I’ve seen both seasons multiple times now and some episodes even more often because I like to rewatch random episodes whenever I need a pick me up.

For everyone who wants a tv show that deals with various different current topics in a respectful and honest matter, this is the show for you! We follow a Cuban-American family that made their way into my heart within the first episode.

Penelope is a single mother, a vet, someone who deals with mental health issues and is allowed to be a badass but also vulnerable.

Elena is this fifteen-year-old girl, who is so, so well educated on so many different social issues, a gay teenager, an amazing older sister to Alex and overall super freaking awesome human being who I wish I could be like.

Lydia. Oh my god, this woman. She’s Penelope’s mother, a woman who believes in God, loves her family a lot and loves to help where she can, she’s a widow and quite sexual (Rita Morena, the actress who plays Lydia, says she really wanted that to be part of the character). This woman is a gift. Honestly.

And there are so many other fantastic characters throughout this show and one of the most fun things is that Penelope is actually allowed to be friends with a man and that’s all they are. Friends. Schneider and Penelope are also so real with each other and not afraid to call the other out – I love watching them.

I don’t know how much more I need to gush for you to realize that you need to get on this show already and just in case you need another little push: Brooklyn Nine-Nine’s Melissa Fumero and Stephanie Beatriz are going to be on season 3! I don’t know how big their roles will be, but they both seemed to be super excited when they shared the news on Twitter!

The very first week of July my nephew Noah was born and I have to say, I am so completely and utterly in love with this little guy already. I keep wondering how I can possibly fit more people in the space that’s in my heart but apparently, it just continues to grow and grow?

And there is nothing quite like just sitting on the couch and having Noah lay on my chest and falling asleep. It’s so precious and sweet and my heart gets close to exploding every time. 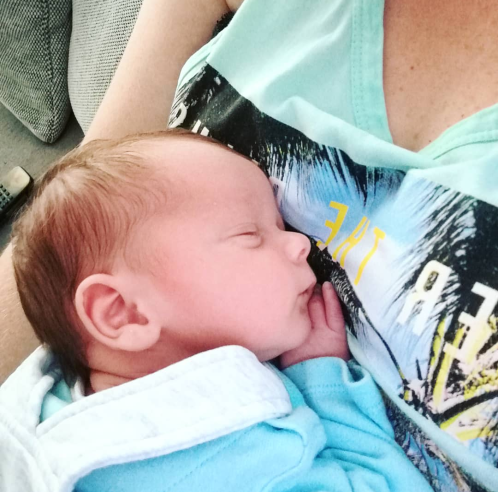 But something that is even more amazing to see is the way my two older nephews are around him! Adrian basically claimed Noah as his the second he first saw him in the hospital and demanded that I hand Noah off to him as soon as he saw that I was holding his brother. And he will run into the nursery to check what’s wrong at the smallest noise Noah makes. Both, Adrian and Alexander are always so aware of what Noah does and are ready to help in any way they can.

Seeing them like this seriously makes me want to have kids about a million times more. Especially want more than one baby because that sibling dynamic is so, so precious.

These last couple of weeks/months we’ve actually had a proper and long summer? I can’t even remember the last time I had to wear a sweater/hoodie to keep warm. I’ve basically been living in tank tops and either shorts or jeans – depending on how hot it got (and my upper body/arms are proof of this as they are so nicely tanned – unlike my pale AF legs).

With summer and wearing shorts also comes this annoying thing where you keep thinking about whether or not you should be wearing shorts because you’re on the bigger side of things (personally, I’ve come to the conclusion that I don’t want to suffer in 30+°C weather in jeans just because my thighs my juggle when I walk) and all those super fun thoughts.

But as I shared in my previous Things I’ve Been Loving post, I’ve been trying to be more body positive lately and I think it’s slowly turning into something real. I even wore a bikini when we went to the pool the other weekend. Mind you, I was also still wearing a pair of shorts to cover my upper thighs because I wasn’t feeling like showing that much skin that particular day but I still wore a bikini top and I felt mostly fine! I can’t wait to get further into a place where I don’t give a shit about those kinds of things, but slow and steady wins the race, right?

How about you guys? What are some things you’ve been enjoying lately? Also, for my fellow Europeans out there who have been having these ridiculous temperatures lately, how did you guys deal with them? Did anyone else eat ice cream for every meal??? I swear, I got a pack of 8 on Monday and by midday, on Tuesday they were all gone. I wonder who ate them.

Have you seen any of the shows I mentioned or read The Conqueror’s Saga by Kiersten White – if so, what did you think??? And how excited are you for season 3 of One Day At A Time????