Believe it or not, but I’m usually pretty good about keeping my (digital) TBR shelf to a manageable number and filled with books I’m actually interested in reading.

And despite my best efforts to check and clean out my TBR shelf I’ve accumulated a couple of books that have been on that particular shelf for so long that they are collecting (digital) dust and I figured it would be fun to talk about them? Maybe naming them will give me that burst of motivation to actually pick up some of them and read them – a wild concept, I know.

The Book Thief by Markus Zusak

I don’t know why, but I feel like I can hear some of you guys taking in audible gasps at the fact that I haven’t read this book yet and I want to say I’m sorry but at the same time, I’m not really? I did get about 200 pages into this book at some point but then I stopped reading for god knows what reason. And I keep meaning to pick it back up because I truly want to read this book at some point – it feels like a Young Adult classic in so many ways.

I keep checking different audiobook services to see if they have the audiobook available but I haven’t had any luck yet (UPDATE: I just checked Audible and apparently they have it? How have I not found it there before???) – I feel like that will be the way I finish this book, given that I enjoy the narrator.

This was actually also part of a little challenge I had planned to do all the way back in April that I still haven’t gotten around too… wow. I am terrible with actually pulling through on things I said I would get done. But wait, why am I even surprised? That’s literally one of the most Me Things. BUT! I just downloaded the audiobook to my phone so hopefully, I’ll get to this sooner than I originally (and ever) thought!

The Diviners by Libba Bray

Here we have another book that’s been collecting digital dust on my digital TBR shelf for years now but I actually only took steps towards reading this sometime this year?

I had a couple of audible credits so I checked my Goodreads TBR to see if I wanted to get to any of the books immediately (that was the plan, at least) and this one stood out to me, so I got the audiobook. And I haven’t touched it since. Go me, honestly.

But to be fair, this audiobook is over 18 hours long so even if I listen to it on my preferred speed that’s still 9 hours I’d have to dedicate to this book and I don’t know if I’m ready for that just yet.  But if I remember correctly, this is set in like the 1920s which for some reason apparently makes me think it would be a perfect fall read? So maybe I’ll get to it this fall season too? Can you imagine if I’d actually read some of these books this fall because I’m mentioning them now? Would you guys be proud of me for it?

The Young Elites by Marie Lu

Please don’t ask me how I haven’t read this trilogy yet, especially since I’m a big Marie Lu fan (also, should I add this here? I haven’t read Batman: Nightwalker yet either…). But when this first came out after her Legend trilogy people were pretty split on their opinion about this particular trilogy which turned me away from it quite quickly.

And I think I’m almost glad that it did because the main character is apparently more of an antihero type of personality and I don’t know if that’s the kind of character I would’ve enjoyed reading about back when this first came out. My taste in characters has changed quite a bit over the years and I feel like I would appreciate her a lot more these days. Maybe I’ll make an event out of reading this trilogy for a readathon or something – would anyone be into that?

For anyone who knows Marie’s publication schedule and wonders ‘Hmmm, has Swetlana read Wildcard yet?’ – no, I haven’t! And not because I’m not interested (I’ve been impatiently awaiting this book for a year, I need to know what happens next) it’s because I’ve fallen down another YouTube hole this past weekend and I don’t know when I’ll actually crawl out of it (if you follow me on Twitter, you’ve heard all about it).

At this point, I can’t even tell you guys how often this book has appeared in posts because I keep meaning to read it. For years now, I think.

This was one of those instances where I knew about the author before I ever heard about the book (Pierce basically made headlines for being the hottest author in YA back before/around the time Red Rising released) and then promised myself I’d read his book to see what I think of him as an author rather than just the person Pierce. And yeah, it’s been years since and as the nature of this post tells you, I still haven’t read it.

I don’t know if I’m a bit apprehensive about reading it because he’s a male author? Or because it’s the genre? I don’t know, but for some reason, I keep pushing this trilogy off. And I actually have a copy of Red Rising on my shelf and it’s been there since around February of 2017. Maybe I’ll have to go the audiobook route for this one too.

Apparently, my solution to any and all books I can’t seem to physically make myself read is to just get the audiobook. 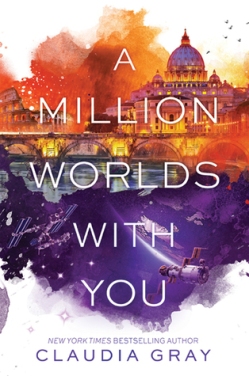 A Million Worlds With You by Claudia Gray

Look! We’re changing things up for the final book on this list as this is actually the last book in a trilogy I have yet to finish.

If I remember correctly, it also took me a bit to get to the second book which was a bad idea because we all know how bad my memory is with these series/trilogies. It’s why I’m currently in the middle of two series rereads to prepare myself for new books.

But yeah, this is sci-fi which is a genre I don’t reach for often plus it’s been a little bit since I read the previous book and I don’t exactly feel like rereading the previous books just to read this one – mainly because I didn’t absolutely love them so the motivation isn’t there (unlike with my current series rereads) to commit my time.

Also, I’m about 90% sure that I got the first book in this trilogy because the covers are just so damn pretty and we all know I love me a pretty cover!

How about you guys? What are some of the books that have been on your TBR shelf (be it physical or digital) the longest? But also, how long have they been on your TBR? I’m curious to hear, let me know in the comments down below! And if you have read any of these books, feel free to share any and all reasons as to why I should get to them before any of the other books on this list – I’m nothing if not easily influenced, especially in my reading choices!

22 thoughts on “5 Books Currently Collecting Dust On My TBR”