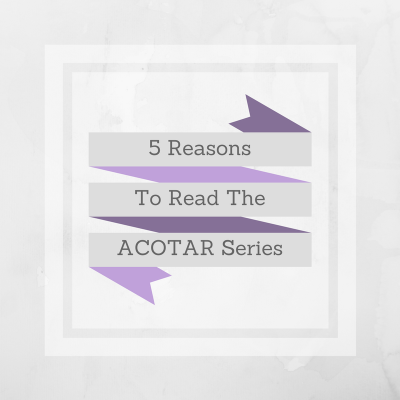 I think it’s no surprise to any of you guys that I really love the A Court Of Thorns And Roses trilogy by Sarah J. Maas and since I just finished reading the final book in Feyre and Rhysand’s story I thought it would be fun to share some reasons for you guys to read it too! I don’t know how up to date with series/authors you stay that you aren’t reading so you may or may not have heard that Sarah is writing three more companion novels set in the world of Prythian starting next year, plus two more novellas once those are all released. But Sarah herself has said that this trilogy was Feyre and Rhysand stories and that is over (which I am so sad about!).

No matter if you keep up with authors you don’t read or not, you have probably heard about the lack of diversity or the way minorities are treated in some of Sarah’s books which is obviously something I wish wasn’t a problem with one of my favorite trilogies, but unfortunately it is. But! Sarah did try to improve on the issue of diversity in A Court Of Wings And Ruin – but I can’t speak to how well she handled it, as I am a straight, white woman.

If you decide you can’t support a trilogy for those reasons, that is absolutely understandable and I won’t push this trilogy down your throat! But if you’re still interested in what these books are about, let me give you some reasons why you should read the A Court Of Thorns And Roses trilogy!

I am honestly so in love with almost every character we meet in this trilogy – some may have taken a bit longer to grow on me (Nesta and Elain), but I still really love them and I thoroughly enjoyed getting to know them over the course of the story! And before I get into my favorite group of people since the characters from Six Of Crows, I want to talk about Lucien.

The first time I read ACOTAR I liked Tamlin as a character (that has since changed quite a bit), but I loved Lucien! He is snarky, he isn’t afraid of talking back and he was a great friend to Feyre while she was at the Spring Court and Feyre cared a lot about him too. I was a bit worried about where his character was going for a little while, but we’re still good. I love his guy and I hope we learn more about him and his past in one of the upcoming books!

And now, let’s talks Inner Circle! I think I feel in love with this group of people almost immediately! They all have their own personalities and are definitely distinguishable from each other which I sometimes find difficult whenever there is a group of people that is being introduced to the reader. But all of them, Cassian, Azriel, Morrigan and Amren are their own people and have their own stories and motivations.

Let’s talk about Rhysand! I remember being intrigued by him when I first read ACOTAR but I was still pretty set on Tamlin being a good guy and I wasn’t sure about Rhysand but then I read ACOMAF and I was sold on the guy. I love him with everything I’ve got! He is such a great character with a story to him and I don’t know what to say without spoiling anything for you guys. Just know that I love him a lot.

We can’t forget to talk about Feyre who was such a kick ass character! She was thrown into a world that was utterly new and at the beginning terrifiying to her but she grew so much over the course of the story and the woman that she is by the end is so awesome! She really did go on quite the journey and learned so much about herself and what she wants and more importantly: what she deserves in life!

The ACOTAR trilogy really gave me some interesting and fun relationships that I am so happy to have! The Inner Circle in itself was such a fun dynamic to witness (if you look at my copies of ACOMAF & ACOWAR you can see just how much I love them – there are TONS of tabbed scenes!) and then to see Feyre thrown into the mix and how they included her and treated her was great too! I also really appreciated the relationships Feyre has with both Mor and Amren!

Seeing Rhysand and Feyre go from where they started off in ACOTAR all the way to ACOWAR was also a fun experience! I loved that they actually communicated with each other and shared things about themselves – including the ugly things. Rhysand is #TeamFeyre from pretty much the start and I loved seeing that develop and change.

As the story continues into ACOWAR we also get to see all of our characters interact with a lot more characters and we get to see them adapt to the new circumstances.

Unfortunately for all of us, Feyre is stuck at Tamlin’s manor for the majority of ACOTAR and it really takes us until the next two books to get to see more of the world of Prythian but once we finally do? It’s really stunning! We get to visit multiple courts after which I was ready to pack up my backs and move to one in particular. I am still waiting for someone to come and whisk me away in their strong Illyrian arms (and no, I’m not talking about Rhysand. I want Cassian). 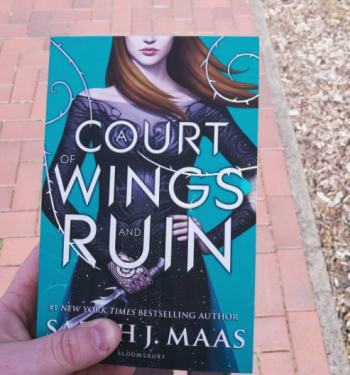 This is a fantasy trilogy, so magic is obviously a big aspect of the story and I really loved that it was specific to the different courts in a lot of ways and I loved seeing it manifested in different characters! We also see characters learn to use their magic which is something I always appreciated! Give me all the training montages! And with magic come all kinds of different creatures and does this trilogy have a good amount of them! Some of them are really quite terrifying and disgusting and I was hoping they would suffer a slow death and other really grew on me the more we saw of them! There’s also this creature in the third book that Cassian is TERRIFIED of which was hilarious to read!

Reason #5: The Writing And The Story

This is definitely something that is important to me. I love it when an author makes me turn page after page because I need to know what happens next and often it’s a combination of a great story and great writing! I love the addicting kind of writing so much and I feel like Sarah definitely has that kind of writing! I read all of her books within days of recieving them and even stayed up nights just to finish them – sometimes not even realizing I was doing it (Heir Of Fire, I am looking at you). And Sarah’s storytelling and writing have definitely improved over the nine books she has published so far and I can’t wait to see where she is going to go in the future!

So yes, if you haven’t read this trilogy yet but you are willing to give it a try – I hope I was able to give you a few reasons why you should pick it up! It’s been a couple of days since I finished ACOWAR and I am still thinking about these characters and I honestly can’t wait to be reunited with them soon! I already miss Cassian a lot. The guy seriously grew on me so much – especially during ACOWAR!

25 thoughts on “5 Reasons To Read The ACOTAR Trilogy”